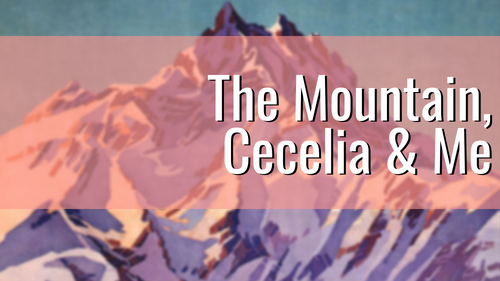 The light from the sun lit the inside of the tent and woke me up. My eyes opened and I looked at the dirt next to my face. I heard my tent-mate shift on the blow-up mattress I had let him use – opting for the ground instead. I knew I could rest on the cold ground easily enough, but once the tent lit up like a nuclear blast, there was no hope of going back to sleep. I slipped outside.

Holy crap! There was a goddamn mountain next to us! I didn’t know that was there. We had arrived late at night. The sky was black when we came. We were at a rustic campground nestled among a mountain valley with no other people in sight and no light pollution. Last night, I simply couldn’t see the mountain; its looming blackness blending easily into the night sky.

I shuffled through the dirt to the concrete stables labeled “restroom”. Looking at the time it was six-something in the morning. I was getting my first good look at our latest stop.

I was at present on a road trip, hired as a documentary photographer, for two men traveling across the country on motorcycles following Route 66 to celebrate their 40th birthdays. Jamie, the videographer, and I traveled behind them in a minivan. Jamie and I passed hours upon hours with conversation and music, watching two motorcycles roar their way up and down mountains, through deserts, slicing through cities and giving me my first real taste of “Americana.”

Last night some miraculous navigation led us to this campground. (The location of which I have never been able to find again.) I stretched my body. I had been warned that sleeping on the ground would make my body hurt but the only complaint I had was how freaking early it was. The isolated, abandoned campground, surrounded on all sides by small mountains and mesas, offered a reverent silence. For no reason whatsoever, with no plan or preparation, I found myself walking to the nearest mountain. I was gonna climb that thing. Right now.

I couldn’t really explain it. I had seen mountains and hills before. But ever since being on this road trip, everything I saw I wanted to climb. It had never seemed possible to me before. In Missouri, the mountains dotted the horizon, far in the distance, tamed long ago by winding roads complete with irritating speedbumps. But here, along Route 66, all the mountains were within reach and had a teasing slope. I knew that if I could just get close enough, and was determined enough, I could climb to the top of one of them. This was my chance. It was happening now.

I was wearing jeans, sneakers, and an oversized sweatshirt layered over a t-shirt. I had nothing in my pockets. My plan was to head straight to the mountain I saw in front of me and climb – whatever it took. I pulled the hood up, shoved my hands in my sweatshirt, and set off.

Midway up the mountain, I was both emboldened and frightened. I was right. If you just took your time, planned your steps, this was absolutely manageable. I felt like the soccer team from Alive! Just one step at a time. Move slow. Be aware. Totally possible. I was now sure that if I were ever left stranded atop a mountain I should risk it and try to move. (That was a question that had long bothered me; pretty much since I saw Alive.) But at the same time, the slope was becoming more drastic. The steps were becoming more daring. It wasn’t as easy to plan the next move. You had to consider how you would get down; a vital question! Getting up was one thing; getting down was another.

Turning around, the campsite below was a speck. The view of the mountain valley, however, was breathtaking. I could go higher, but I had to make a smart choice and consider the return trip. I sat on a convenient ledge in the shadow of the peak and watched the mountains awaken. I was brought to stillness and peace as I listened to the wind caress their jagged edges.

Swinging my legs back and forth like a child, I suddenly burst into song!

Listening to my voice echo among the mountains made me laugh, and then I listened to that resonate as well. I hugged my knees to my chest and cocooned myself inside my sweatshirt as I watched the day dawn over the valley. I prayed. This was the closest to God I’d ever felt. I thanked the universe for a moment as beautiful, simple and still, as this one. I wished that upon my death I would remember this moment as one of the moments in which life was just as I wanted it to be. I meditated, feeling the stubborn strength of the mountain as eons had passed in front of it. I tried to drink in as much ancient wisdom as was available. I lived the moment to its fullest.

Then I simply climbed back down. I walked back across the desert valley to the campsite. We packed up and drove away.