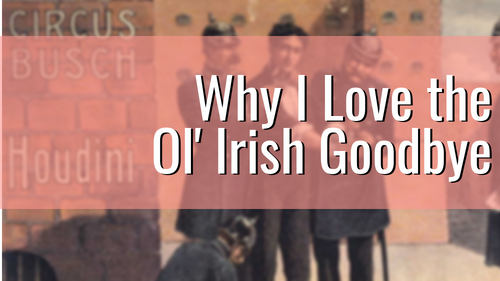 I had made a good showing at the bar. I charmed, gamed, drank and even had my shoes mentioned on the mic; so, all in all – good. But now I was ready to leave. It was time to disappear. With a text to my friends, I was out the door. Heading to my car, I received the only reply: “Houdini”. Yep, I’m notorious for the good ol’ Irish Goodbye. 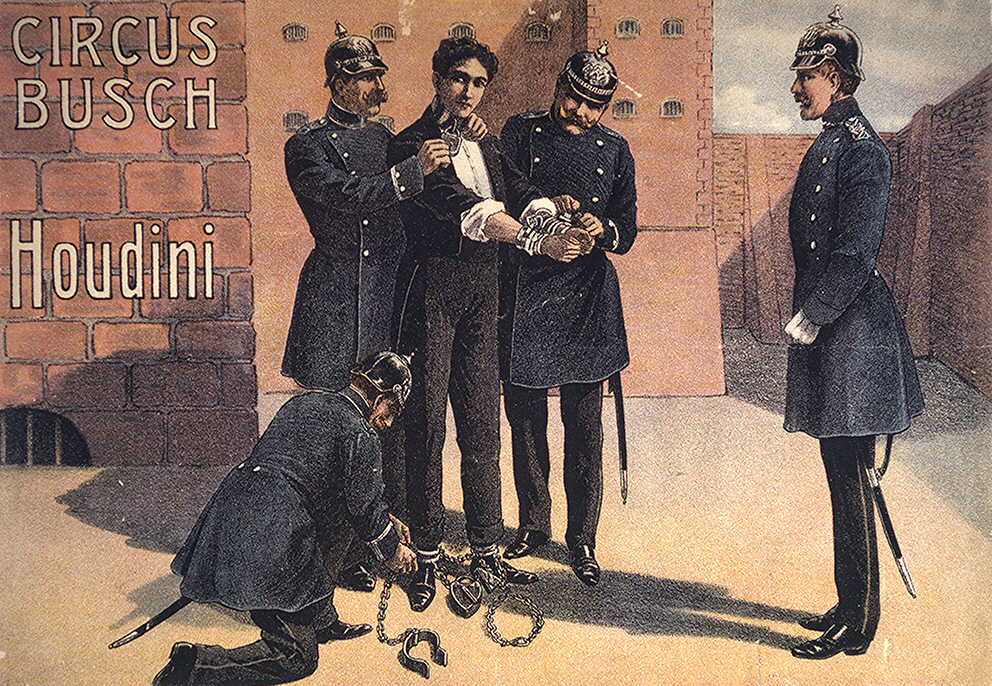 The “Irish Goodbye” according to Urban Dictionary is: to depart, as from a bar or pub, without notifying the friends or family you are with. But I choose to look at it as simply making a choice to leave and then, because I’m an adult, leaving. I’m a huge fan of this practice.

Research suggests that the “Irish Goodbye” is so named because, during the Potato Famine, loved ones would commonly not be heard from again once they left for America. However, another less morbid origin tale claims the act of sneaking out of a party was to avoid having someone take your keys away lest you be too drunk to drive.

I’ve ducked out on parties, get-togethers, bar nights, club nights, barbeques and even sleepovers for over a decade. Over the years I have tried to be unobtrusive, and polite – making sure to always pay my tab. It honestly never occurred to me anyone had noticed. That was, sort of, the point.

I figured I owed all of you an explanation.

Maybe it’s a poor excuse, but I argue that I accidentally formed the habit of leaving places early. As an event photographer, I was in every kind of party, gala, red carpet and club imaginable. My job was to go there and leave. I needed to show up, take photos well into the shank of the evening and deliver the photos the next day. That meant I had to leave enough energy to commit to hours of work after I got home.

Adding to this is the fact that I was working by myself. It was completely up to me to decide if I’d covered the event well and captured the noteworthy details. So, when I was ready to leave, I simply packed up and left. No muss. No fuss.

There is one final point related to forming this habit: I was not invited. Being hired to go someplace is different than being asked to participate. I simply was not invited and didn’t feel right participating. I actually took those boundaries seriously.

However you want to slice it, I had my reasons for developing a habit of leaving places early. But, let’s be honest. These are great and legit excuses, but they are not the real reason I love the Irish Goodbye. Despite forming a habit, it’s been years since I had my camera to use as an excuse. And yet I continue to sneak out of places without so much as a head nod. So what is really going on?

The strongest impetus that leads me to duck out is panic. Offhand, it would appear as though I have no social anxiety; this is false. I have created a very convincing character to play in social situations. She is loud, gregarious, brassy, ballsy and often inappropriate. She gets me into, around and out of social situations. (She also gets me in a fair amount of trouble.) She’s my passport. And she made me a very good photographer. But, she is an act and only available for limited amounts of time. She is not able or authorized to answer real questions about my life. To do so would bring the entire facade crumbling down. Therefore, when the panic of losing my facade appears imminent, I run. When conversation lulls or becomes uncomfortable, I panic and leave, it’s just that simple. It’s chickenshit, clearly.

Here’s the truth, though, why I’m such a huge fan of the Irish Goodbye: it feels good!

Everything about an Irish Goodbye feels wonderful. You are completely in control of your life at that moment. With no more than a few steps you can disappear into the crowd and have no one to answer to but yourself. Do, feel, think however and whatever you want. It’s the ultimate power play.

Are you uncomfortable? Are your heels pinching your toes? Is that guy bothering you? Are you afraid of getting stuck in surge pricing? All of these problems are easily and immediately solved the minute you decide to leave. The shoes come off. The tension releases. The effort abates. Immediate calm is waiting on the other side of every exit if you want to take it.

(Behind The Curtain – Letting Down My Guard)

I suppose, truthfully, I’m just not very good at letting down my guard – at all. The only way I’ve ever found to feel safe being myself is in private. Often, after an admittedly shorter time than even I would like, the effort overcomes the reward. In my head, I think I’m leaving a good impression, a pleasant memory, and inspiring the thought “She’s fun to have around.” At least I’ll get an invite for next time!

The real question is: what is on the other side of the Irish Goodbye? Am I such a coward that I settle for the known versus the unknown? What happens if I stick around? What experiences am I missing by ducking out?

Maybe if I stuck around some of these situations I’d discover awkward moments end and conversation picks up. Perhaps I’d find that I can relax and not have to vigilantly protect myself.

Well, crap, now I have to find out.