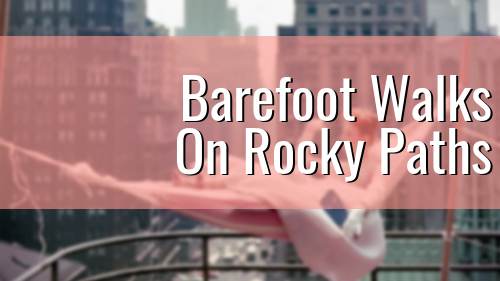 In a completely normal, non-paranoid, totally sane way, I have always behaved as though I was starring in a movie. From childhood to present day I have constantly starred in my very own autobiographical film featuring, written by, and directed by me, with an interesting and kooky rotating cast of characters. Because of my Kardashian approach to life, I often make myself do things I don’t want to do for the sake of the non-existent cameras. It adds a certain spice to life. All hail imaginations!

I remember my father concerningly tell me that I had other choices. He was right, of course. I looked up at his face and saw the utter confusion in his eyes. He couldn’t figure out what I was doing, or why I was doing it. I was normally pretty smart, but this was just inexplicable. But how could I tell him that the cameras demanded that I walk barefoot across the rocks? Would he understand?

It was a picture-perfect setup. I was merely responding to the audience demographics! My family and I were camping at a beachfront

Florida KOA for a late summer vacation. At this moment, we were all heading to the waterfront to take in one last technicolor Florida sunset. The glass tinkled in Mom and Dad’s gin and tonics and my brother’s Gameboy beeped his disinterest as we hiked across the mulched pathways and shell shards. My costume was the 10-year old equivalent of a late 80’s douche box, complete with the hand-held strappy sandals – which is why I was walking barefoot.

It’s not like I could pass up the opportunity to be caught in a seaside breeze, with the bronze light from the sunset igniting my red hair against the rocks. I mean, the producers would never stand for it! Did it hurt? YES! But sometimes an actress has to suffer for her art. I could get my (fictional) assistant to ice my feet later.

I always loved the city when it was empty. Strangely, that was the only time I really saw it. It had been seven days of St. Louis Fashion Week. Runways, crowds, and deadlines – oh my! I was shooting all week long, all day long, all night long, for multiple clients. It was exciting, exhilarating, and exhausting. But it was finally over. The moment I dropped these photos in the late-night mailbox of the magazine – to accommodate their 6 AM deadline – I was officially done.

Approaching the oversized glossy black door, with its handle mysteriously placed in the center, I slipped the envelope containing the files in the brass mail slot and took a deep breath. I felt the tension from the past week disentangle itself from my nerves, and my body listed in response. I leaned back against the glossy black door and drank in the moment of peace. My eyes grazed across the courtyard as the nearby fountain bubbled its approval. Then with another deep breath, I turned and walked away towards my first real break in over a week.

In my head, I heard the music swell. We’d need to get licensing. My steps widened as my cadence increased. Our heroine had done it; she had survived and thrived an overwhelming week. She had earned her battle stripes. She had conquered. She was at the top of her game. Go, Egan, Go!

As the camera settled behind me, I gracefully, and with great affectation, swept up my long, red hair. Knotting it in my hands, as I officially shed the glamorous and polished uniform of the previous week, I gathered it into a long, unkempt, unbrushed, un-glamorous, extremely basic ponytail. My ponytail playfully swayed back and forth as “Photo Girl” slowly retreated and I returned to my Clark Kent identity. The camera, mounted on a crane, soared back for a triumphant wide shot.

I got letters about that scene. Letters!

Tires screeched as my car came to an abrupt stop. Seconds later, Jason was in the passenger seat. I peeled out before he had buckled his seat belt. As I checked the side view mirrors, Jason twisted in his seat to look behind us. Nervously he shot me a look and said, “There’s no one behind us.” The fact was of little comfort, and we both knew it. We were running out of time.

I weaved in between cars, deftly working to avoid major intersections. Jason pulled out his phone and looked up information. Each second mattered. Making a severe right turn, he and I grabbed the car as the maneuver pulled g-forces. When the car finally came to a stop, Jason and I stared at each other in relief.

We did make it to the movie on time, thank you very much. But the chase sequence got high ratings.

By the time I made it back to the dorm, I was a little ball of anxiety. I had bought as much time as humanly possible (for me) and now I had better have a message from him. And bonus points if I kept him waiting the same way he’d kept me waiting. I was angry. I was annoyed. I was way too eager. I was far too interested. I was irritatingly available. I was ready to see what the answering machine had to say.

The crescendo of tension drew in the audience as they breathlessly waited to see if he called. Everyone wanted our heroine to find love! But when she discovered, heartbroken, there was no message she did something the audience never expected! Without warning, our lead launched the answering machine out the window! The camera panned quickly, capturing the plastic reflect the sun moments before it shattered on the quad below.

From three stories below, the camera caught me looking out my window at the blood-splattering of electronics. With a wicked smile of liberation, I retreated back into my room.